GTA – “Mouse” by Art Spiegelman, along with six books about the Holocaust aimed at young readers, are among hundreds of books that a handful of Missouri school districts have reportedly removed from their shelves since the start of this school year.

The list of books pulled from shelves was released Wednesday by the literary advocacy group PEN America, along with a letter of protest signed by Spiegelman and other authors.

“This is what happens when we operate in a climate of fear,” Jonathan Friedman, director of free speech and education programs at PEN America, told reporters at a virtual press conference Wednesday, sharing the findings.

The books were pulled due to an amendment to a new Missouri law, which deals heavily with child trafficking and sexual assault, which also provides a criminal penalty for providing “sexually explicit material” to students. The law mandates that any professionals found to be in violation of the law may be imprisoned.

Politically motivated textbook bans are on the rise nationally, often prompted by right-wing parent groups and school board members, with the majority of such bans targeting books with racial and LGBT themes. It attracted increased interest from Jewish groups as books on Judaism and the Holocaust were caught in the purges. Tennessee County School Removal From “Maus” from the Holocaust Curriculum and the Texas School District A brief ellipsis of a graphic novel based on the diary of Anne Frank Both were strongly opposed by Jewish groups earlier this year. 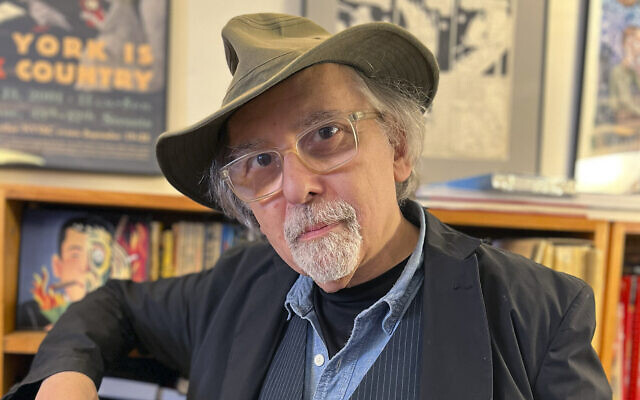 The vast majority of the affected books originated from one school district: Wentzville, a St. Louis suburb that the St. Louis Post-Dispatch reported ordered librarians to pull more than 200 books from its shelves at the start of the semester and place them under review.

In addition, the Lindbergh Schools in St. Louis banned “Dangerous Woman,” an illustrated biography of Jewish socialist radical Emma Goldman by Jewish writer and artist Sharon Rodal. The Kirkwood School District in suburban St. Louis also banned “Women,” a picture book by Jewish photographer Annie Leibovitz with text by noted Jewish writer Susan Sontag, as well as another book by Leibovitz. and “Gender Outlaws: The Next Generation,” a collection of essays edited by LGBTQ Jewish writers Kate Bornstein and S. Per Bergman. 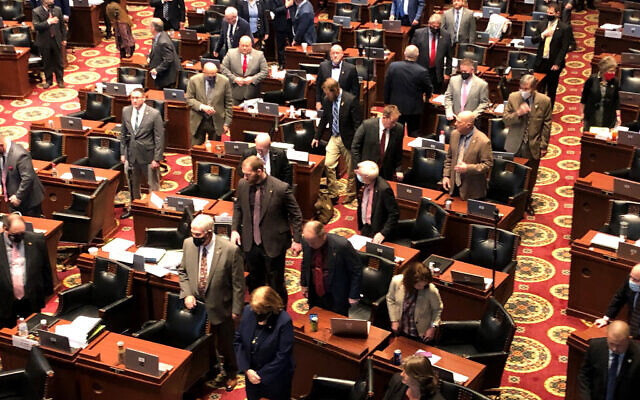 Illustrative – Members of the Missouri House of Representatives prepare to start work on February 3, 2021 in Jefferson City, Missouri (AP Photo/David A. Lieb)

Because of the law’s wording, Friedman said, Missouri school districts—particularly Wentzville—were on guard against graphic novels and picture books that might contain objectionable images. Holocaust books have been designated by parents or teachers as “sexually explicit” because they contain disturbing historical imagery, according to an analysis by PEN America.

“These pictures, basically, that we’re told here are the reasons why these books aren’t on the shelves,” Friedman said.

The Wentzville, Ritenour, and Kirkwood school districts did not respond to requests for comment from the Jewish Telegraphic Agency. A Kirkwood representative previously told the Post-Dispatch, “The unfortunate reality of Senate Bill 775 is that, in effect, it includes criminal penalties for individual educators. We are not willing to risk these potential consequences and would err on the side of caution on behalf of the individuals who serve our students.”

A Lindbergh Schools spokesperson told the JTA in a statement, “Lindbergh has taken the necessary steps to ensure compliance with state law by carefully reviewing library and classroom resources, and removing items from student access if they contain visual imagery that meets the requirements set forth in SB 775.”

A group of students and the American Civil Liberties Union sued Wentzville County this past spring over a variety of book bans, including Toni Morrison’s “The Blue Eye.” Some of these books were returned to the shelves after the lawsuit was filed.

If the books were indeed removed because of images labeled as sexually explicit, the ban in Missouri would follow a similar pattern to that of school districts in Tennessee and Texas that removed the song “Maus” and the Anne Frank adaptation earlier this year. Parties in both regions also objected to the images depicted in the books, which they said were sexually explicit.

Jewish and Holocaust-themed books were banned along with dozens of other books that were not of a Jewish nature, including a graphic novel adaptation of “1984”; “Watchmen” by Alan Moore; Children’s Bible. graphic novels based on Shakespeare’s “Macbeth”, Margaret Atwood’s “The Handmaid’s Tale”, and Lewis Laurie’s “The Giver”; and how-to books on oil and watercolor painting.

“We are grateful to Missouri as a state that has made it clear that it prioritizes Holocaust education,” Rory Becker Ness, executive director at the Jewish Community Relations Council of St. Louis, told JTA. But, she added, “it appears that banning these books goes against the letter of the law and the spirit of the law.”

“Such excessive book bans will do more harm than good. Book bans limit students’ opportunities to see themselves in literature and build empathy for experiences different from their own,” reads an open letter opposing the ban signed by Spiegelman and other authors including Laurie and Laurie Halse-Anderson.

“Students in Missouri are being denied these educational opportunities.”