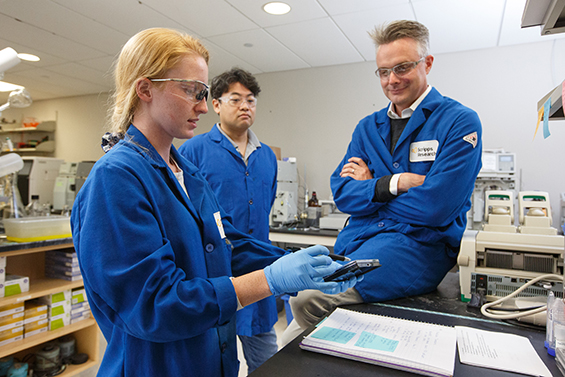 Scientists at UF Scripps Biomedical Research have developed a potential drug for a major cause of ALS and dementia that works by eliminating disease-causing fragments of RNA. The compound restored nerve cell health in the lab and rescued mice with the disease.

The potential drug was described this week in the scientific journal Proceedings of the National Academy of Sciences. It’s designed to be taken as a pill or an injection, said the lead inventor, Professor Matthew Disney, Ph.D., chair of the UF Scripps Department of Chemistry. More importantly, he said, trials showed the compound was small enough to cross the blood-brain barrier, an obstacle other methods failed to clear.

Amyotrophic lateral sclerosis, or ALS, gradually destroys the nerve cells that control muscles, leading to worsening muscle loss and eventual death. The mutation, which is a major cause of inherited ALS, is referred to as “C9 open reading frame 72,” or C9orf72. This mutation also leads to one form of frontotemporal dementia, a brain disease that causes the frontal and temporal lobes of the brain to shrink, resulting in changes in personality, behavior, and speech, eventually leading to death.

The C9orf72 mutation is characterized by an extended repeat of six “letters” of the genetic code, GGGGCC, on chromosome 9, which can be repeated between 65 and tens of thousands of times. When this mutant stretch of RNA is present, it results in the production of toxic proteins that disease and eventually kill the affected neurons. The compound developed by the Disney lab targets the RNA that carries those genetic instructions, thus preventing toxic proteins from assembling in cells.

“The compound works by binding to normal cellular processes and using them to eliminate disease-causing RNA by triggering the cell’s lysis machinery to eliminate it as waste,” Disney said.

He added that this approach could plausibly work for other untreatable neurological diseases in which toxic RNA plays a role.

The paper’s first author is Jessica Bush, a graduate student in the Skaggs Graduate School of Chemical and Biological Sciences at UF Scripps, who works in the Disney lab. Other co-authors include Leonard Petrucelli, PhD, of the Mayo Clinic in Jacksonville and Raphael Benhamou, a former Disney postdoctoral lab researcher now on the faculty of the Hebrew University of Jerusalem.

“This was identified from a large screen of compounds from Scripps Research’s Calibr library, which consists of 11,000 drug-like molecules,” Bosch said.

From that initial screen, they identified 69 compounds that prevented translation of the toxic C9 mutant. Then they improved the compounds by eliminating those that couldn’t cross the blood-brain barrier based on size, weight, structure, and other factors. This resulted in 16 candidate compounds, one of which was selected for further refinement based on its potency and structural simplicity.

“A combination of tests in neurons derived from ALS patients and in vivo models showed that Compound 1 selectively and robustly binds to toxic RNA, forcing it to be degraded by the body’s natural processes,” Bosch said.

Patients being treated for ALS in the Neurodegeneration Research Laboratory of the Johns Hopkins University School of Medicine donated skin samples for research purposes. These skin cells were genetically remade into stem cells, after which the Disney team treated the cells over several months to turn them into nerve cells.

“Four different patient cells were used in the evaluation, all of which showed a dose-dependent decrease in known ALS markers while having no off-target effects,” Bosch said.

They also tested the compound in mice that were bred to have the C9orf72 mutation and show behaviors and blood markers typical of ALS. The mice were treated daily for two weeks, after which the mice showed significantly reduced signs of disease and improved health.

Disney said the next steps would be to further study the compound’s effects on cellular health and in rodent models for C9 ALS. He said the evidence so far shows this approach represents a significant advance in the field of RNA drug discovery.

“We show for the first time that you can make brain-infiltrating molecules that eliminate toxic gene products,” Disney said. “The fact that we’ve highlighted this in ALS shows that this could be a general approach for other neurological diseases, including Huntington’s disease and other forms of muscular dystrophy.”